Today was the first day of starting my trip to Bandon, OR.  As I was stowing things away Max was patiently waiting to go.  My first leg was from Bertrand NE to Newcastle WY which is where my brother Jimmy lives.  He and I are caravanning in our 5th wheels for the length of the trip. 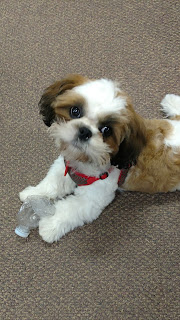 Max was playing with a plastic water bottle, he sure likes to chew on them.

I observed the dark clouds in the west and realized after a quick check of the radar that we would be heading into some rain.  Rain it did north of Ogallala and by the time I got to Lewellen it turned into snow.  The flakes were very large and melted as fast as they landed on the windshield. 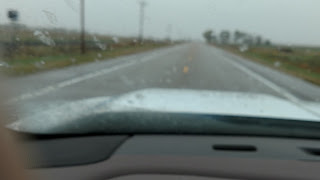 The snow continued until I reached Bridgeport NE which is just east of Chimney Rock, I had hope to get a picture but the rain and clouds didn't allow for it.

As I got into Scottsbluff I observed the very large piles of sugarbeets waiting for processing. I didn't stop to get a picture but wished later I had.

On to WY I went and as I turned north on Hiway 85 towards Newcastle the sun started to break through the clouds.  I saw herd after herd of Antelope feasting on the dry prairie grass. 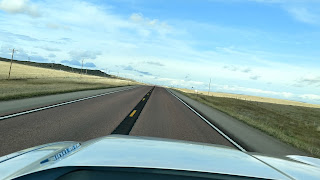 I'll be spending a few days here in Newcastle as my brother is the director of the local church melodrama performance.  I plan on attending two nights performances. "Blazing guns at Roaring Gulch". Melodramas are fun to see and you get to hiss and boo the villain and cheer the damsel.